Find this article at:
go.ncsu.edu/readext?689947
— Written By Matthew Vann

By now, much of the resulting injury from Sunday morning’s (5/10) frost event has been evaluated. In general, it appears that most of the tobacco belt was spared from frost accumulation; however, there are localized areas that experienced anything from a light to a heavy event. Painting this situation with a broad brush is very difficult because there were places that didn’t get frost that probably should have (due to geographic location) and vice versa. For example, we did not record any frost at Central Crops Research Station (on the Wake/Johnston line southeast of Raleigh); however, social media exchanges tell us that places further south weren’t so fortunate.

We in Extension have been very busy making recommendations for how to proceed. Given the variety of conversations that have taken place, we felt it valuable to provide something that everyone can access. Below are the considerations that have been discussed:

1.) In what situation should you replant or re-peg tobacco? Replanting considerations should only be made if more than 15% of a field has been killed. Our definition of killed is that the bud is not green (or even yellow) but rather brown or black (in this case it is plausible that the whole plant is dead). We’re also being a little less conservative with that number because of questions about transplant quality. If seedlings have not been managed appropriately in a greenhouse, then they most likely won’t be worth using in the field. Of course, if severe damage is isolated to one part of a field, then just that area should be replanted and not the rest of the field.

2.) How should you decide what to replant or re-peg? Again, let the bud of the plant serve as the guide. If it is green or yellowish, then it is still alive and has a chance to rebound. We have to pay attention to the yellow bud because it my be indicative of cold shock. If it is brown or black, it’s dead. In this scenario it is very likely the rest of the plant is dead as well. However, if this is not the case you can expect these plants to sucker as growing conditions improve. Certainly, turning a sucker in this case is an option but it’s going to be costly. I also don’t think that this will be a common scenario following frost. This scenario is much more common following hail. The take-home message here is that a plant with a living bud will rebound and grow faster than a replant at this point.

3.) Should you even consider replanting? The simple answer is yes, but only if you had a major frost event. We have reported that our transplant supply is in very short supply this year, so it’s going to be hard to find large quantities of plants. One must also consider the law of supply and demand – short supply is likely to raise the price of plants. Given the current ag economy, buying additional seedlings for marginally to minimally impacted areas may not be a great idea. In addition, various replanting methods should be considered – particularly where machinery will be used. During replanting, if tobacco roots are exposed to fertilizer bands, severe injury (or death) may occur. The same thought process could be true for some herbicides (sulfentrazone, pendimethalin, and napropamide) which could severely stunt plant growth. The safest way to ensure that you avoid these issues is to simply replant directly into an existing bed. Research here in North Carolina from 2003 – 2005 consistently showed no major benefit to tilling and re-bedding in these circumstances. Again, given the risk of not knowing where fertilized bands were moved to, it’s just not worth the risk. To go one step further, as was just mentioned, tillage is going to move some of the pesticides that were applied. It is likely that re-application of most of these products will be required, so the question then becomes whether or not the additional investment is financially worth it.

4.) What are the ramifications for choosing not to replant or for plants exposed to cool conditions? This may be the hardest question to answer. Past experience has shown us that seedlings exposed to cool, cloudy conditions after transplanting are more prone to premature flowering (and ground suckers) than plants grown in warmer, sunnier conditions. While we do not have any definitive parameters to say yes this will happen or no it will not, we can probably expect to see premature flowering in some places. I believe that conditions have just been too cool for the last month to skirt this issue. When this happens, growers are encouraged to physically break the flower out of the top of the plant and then wait for it to sucker. Once suckers develop, all but one of the uppermost should be removed. This sucker will gradually transition and become part of the main stalk of the plant and (relatively) normal regrowth will occur. Be mindful that this new point on the plant is often a weak spot on the stalk and that may break during wind storms. It will also create a slight bow/crook in the stalk, which may impact stalk-rundown following the application of chemical sucker control products.

5.) What now? I received photos from a farmer in the east who has a very severe case of what appears to be Weather Fleck (Figure 1 and 2). This particular scenario came my way because they thought it might be herbicide injury. While this is the only Weather Fleck I’m aware of, our growing conditions (cool, cloudy) have been very favorable for this weather-related issue. For those not familiar with weather fleck, it is a physiological response to ozone exposure through the stomata. It’s only observed on older leaves and does not translocate to newer growth. It’s ugly, but should be ignored at this point because there is nothing that can be done to address this issue nor will it amount to anything at the end of the season. For more information, check out this Agronomy Note from 2016. Switching gears a bit, I strongly encourage tobacco farmers to resume planting as soon as they can. For the crop that’s planted and that will not be replanted, it needs to be fertilized and plowed. The short term forecast looks very favorable for growth, so let’s take full advantage of it! 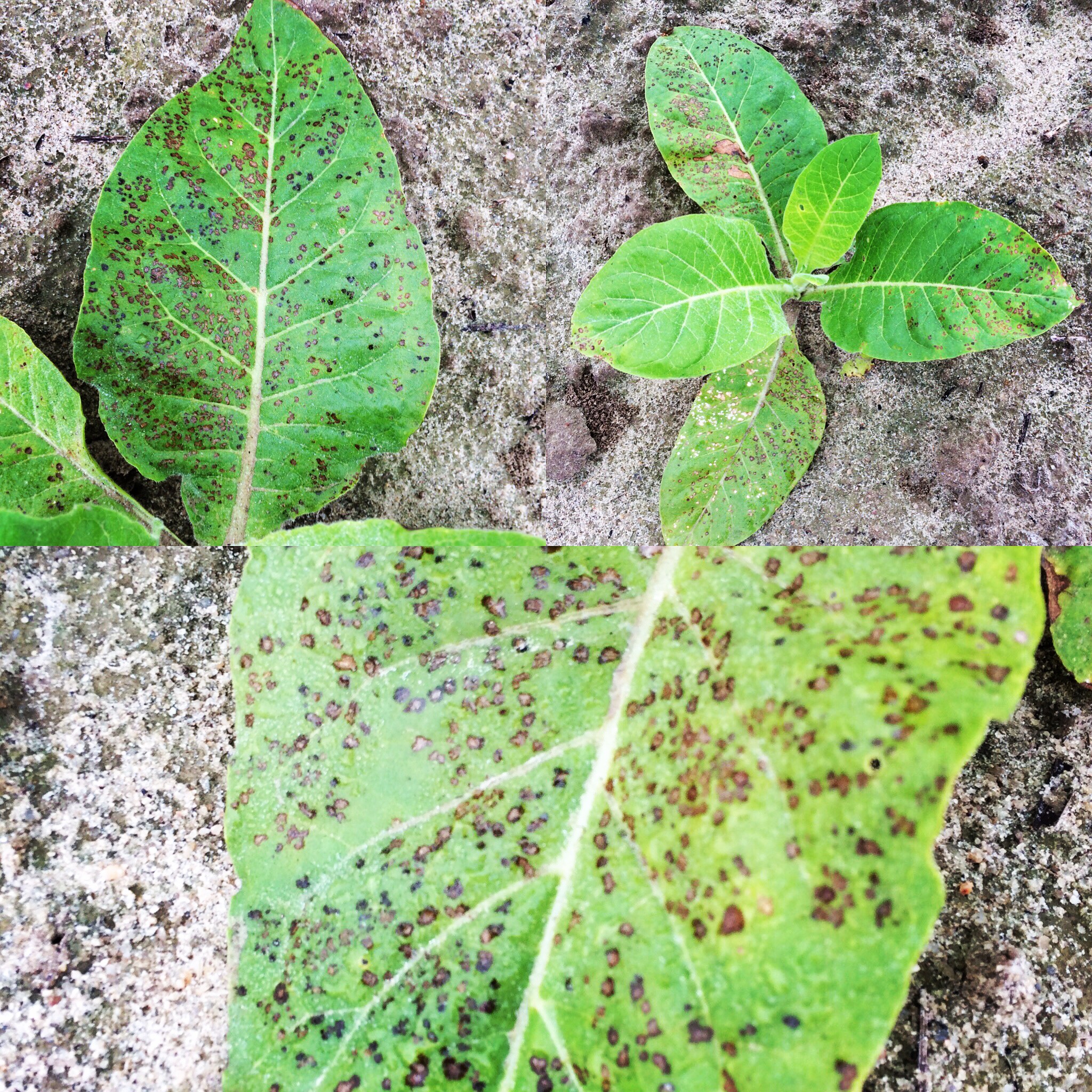 As always, give your local Extension agent a call if you have other questions about this situation. These are very unique circumstances and we’re here to help!