Find this article at:
go.ncsu.edu/readext?413719
— Written By Matthew Vann

As the 2016 tobacco season rolls into June the crop as a whole still looks very solid in most of the state. We continue to creep closer and closer to wrapping up transplanting since the majority of the Eastern Belt has finished; however, there’s still a respectable number of acres to set in the Old Belt. With the number of acres still left to set, Tropical Storm Bonnie has not been a friend to North Carolina. To add to this system, most areas were already very wet and, at times, unseasonably cool going back two to three weeks. Though, a small window of reprieve was felt last week when we finally had temperatures approach 90 degrees with not a cloud in sight. Overall, this crop continues to surprise me at how fast it is progressing and how good it looks–given the cool, damp weather we seem to be unable to shake.

Despite having such an exceptional crop at this point we have not been without a few issues that go beyond timely transplanting and cultivating. The recent weather has brought along something we typically do not see much of in the Coastal Plain….Weather Fleck. We received a few calls and emails late the week of May 16th about odd looking spots appearing on plants almost overnight. Those communications continued into the following week and it appears that this is one of the most severe Weather Fleck events documented in quite some time. This event is 100% weather related due to the fact that Weather Fleck is caused by ozone (O3) which is an air pollutant. Ozone is a molecule naturally found in the atmosphere (i.e. Ozone Layer); however, it is also found in lower levels of the atmosphere where it is generated through chemical reactions of sunlight, hydrocarbons, and nitrogenous compounds. The production of ozone is not typically an issue when weather patterns allow for the dissipation or movement of the molecule of out certain regions. Based on the weather patterns from the past two to three weeks that has not happened. Therefore, ozone has been absorbed by tobacco plants and once absorbed has started to kill cells at and adjacent to the point of uptake. Here it is important to understand that ozone is a gas and is not taken into the plant through the roots, but rather through the stomata—which is where Carbon Dioxide (CO2) is also absorbed by the plant. Stomata (or stomates) are microscopic openings found at the leaf surface that open and close to facilitate gaseous exchange between the plant and the atmosphere. This is also why most Weather Fleck injury is found on older, larger leaves as these leaves have more stomata and therefore, more sites for ozone entry. 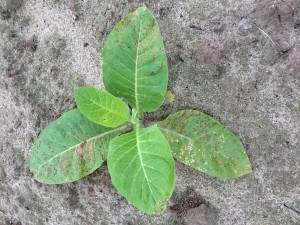 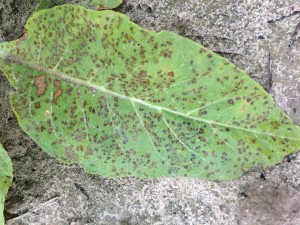 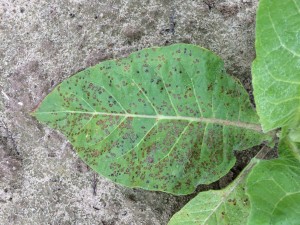 The bottom line is that ozone is not a living organism and cannot be treated with any kind of Crop Protection Agent (CPA) either as preventative or curative. It simply takes good weather to overcome this issue. This fact brings us to another key point: Weather Fleck looks extremely similar to the foliar disease known as Target Spot. Both issues begin in lower, older leaves that are in close proximity to the soil surface and result in brown lesions appearing on the leaf surface. However, unlike Weather Fleck, Target Spot is caused by a fungus known as Rhizoctonia solani which can be controlled through application(s) of the fungicide Quadris (azoxystrobin). In addition to the different causal agents, Target Spot lesions commonly exhibit concentric rings which look very similar to a “bullseye” in that they have alternating colors of dark brown and tan that can form a halo appearance. Weather Fleck does not have concentric rings. Early stages of Weather Fleck lesions are dark brown in color and then transition to complete white over time as tissue dies. It is very important to correctly distinguish between the two very different issues because pesticide application will not correct Weather Fleck and will only serve to increase production cost as well as pesticide residues of Quadris…neither of which are of any benefit. If there is any question regarding diagnosis plant and leaf tissue samples should be submitted to the NCSU Plant Disease and Insect Clinic (PDIC) for diagnosis. Your local Extension Agent can assist with submission.

The second observation this week, and likely most surprising, has been the appearance of cold injury on plants at the five to seven leaf stage. There is little doubt that this issue stems back to temperatures that dipped into the low 40’s on May 16th. For reference, on the morning of May 16th low temperatures in Rockingham, Moore, and Wake Counties were recorded at 41, 46, and 44 degrees, respectively. Cold injury at this stage looks almost identical to what is commonly observed in the greenhouse, with bud leaves and younger leaves being impacted more than older leaves. Fortunately, as is the case with Weather Fleck, warm weather and sunny skies will take care of this issue. When diagnosing cold injury knowing that it can look extremely similar to glyphosate injury is critical, as we have seen a few drift cases this season from burndown applications in adjacent fields. Glyphosate injury should decrease away from the point of application; however, cold injury can appear across entire farms. 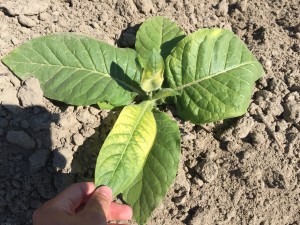 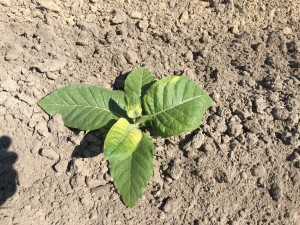 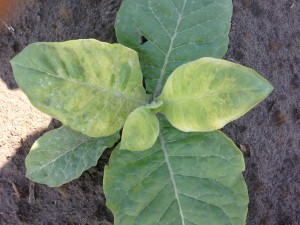 Burndown drift from a tankmix of Roundup, Atrazine, and Realm-Q. Roundup injury is most prevalent in the photo.

Keep checking back with us as the crop progresses for more information.