Japanese beetles and stink bugs are minor pests of tobacco and rarely require treatment. It is useful to be able to identify plant injury from these two minor pests when scouting so that it is not confused with injury to more significant insect or pathogen pests.

When to scout for minor foliar pests

Japanese beetles typically become active in early July in North Carolina and may feed on tobacco during the later half of the growing season. Stink bugs may be present in early summer and are rarely an issue post topping. An increase in stink bug populations may be observed in tobacco if other preferred host crops, such as wheat, corn, or cotton, are harvested nearby.

What part of the plant to scout for minor foliar pests

How to scout for foliar pests 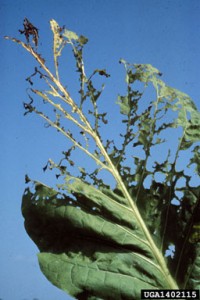 Japanese beetle adults are an iridescent orange-brown with green legs and underbelly and white fringe around the rear of their abdomen. They feed on the upper surfaces of leaves and will drop from plants if disturbed. 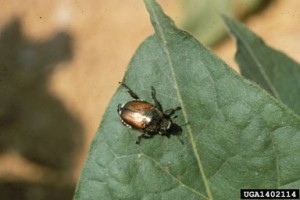 Stink bugs feeding may cause leaves to wilt. Stink bugs typically only damage one leaf per plant, which helps distinguish this injury from wilting due to disease, which affects multiple leaves. Leaves will often recover from stink bug damage, but in dry conditions, they may be further damaged by sun scald.

There are no specific thresholds for Japanese beetle or stink bugs. In the rare situation where injury from these minor pests is similar to that cause by a 10% tobacco budworm infestation, management may be justified, but only insects are still present in fields. If damage is present but no or very few insects are observed, treatments will have no benefit.