Find this article at:
go.ncsu.edu/readext?422026
— Written By jbhenry2 and last updated by Matthew Vann

In this tobacco research update, we highlight the symptoms of sulfur deficiency. These images are part of a project supported by the North Carolina Tobacco Foundation to develop a web-based diagnostic key for the identification of nutrient disorders of tobacco.

Sulfur (S) deficiency can easily be mistaken for nitrogen (N) deficiency in tobacco. The ability to distinguish between the two is very important to properly diagnose the symptoms associated with this nutritional disorder.

Sulfur deficiency in tobacco begins as an overall chlorosis of the foliage (Fig. 1). This symptom differs from N deficiency in the fact that the yellowing begins in the central foliage and works its way up the plant (Fig. 2). The chlorosis that occurs with N deficiency starts distinctly on the bottom foliage and symptoms progress sequentially up the leaves. 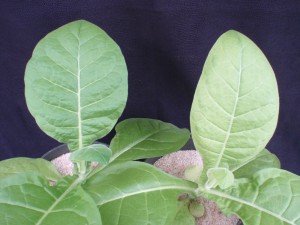 Figure 1. The initial symptoms of S deficiency include an overall chlorosis of the center foliage. These symptoms may be compared with the healthy plant on the left.
©2016 Forensic Floriculture 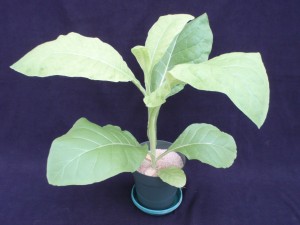 As S deficiency progresses, symptomatic leaves become more chlorotic, and the chlorosis spreads throughout more of the foliage (Fig 3.). These intermediate symptoms may include a mild stunting when compared to a healthy plant, but this stunting is not nearly as prominent as with N deficiency. It becomes easier to distinguish between S and N deficiency symptoms as the symptoms reach this intermediate stage. Sulfur deficiency is accompanied by a vibrant and uniform yellowing, while N deficiency symptoms display a lighter, bleached yellowing that is more pronounced on the lower leaves. 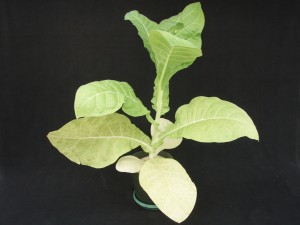 Figure 3. The intermediate symptoms of sulfur deficiency may be seen here in the form of overall chlorosis
©2016 Forensic Floriculture

Advanced symptoms occur on nearly all of the vegetative tissue, including the stems. This overall chlorosis may be observed in the 360-degree image below (Fig. 4).

Figure 4. The 360-degree view of this symptomatic plant with a severe sulfur deficiency may be viewed by clicking on the above picture.
©2016 Forensic Floriculture