Find this article at:
go.ncsu.edu/readext?421018
— Written By pncockso

In this tobacco research update, we highlight the symptoms of potassium deficiency. These images are part of a project supported by the North Carolina Tobacco Foundation to develop a web-based diagnostic key for the identification of nutrient disorders of tobacco.

Potassium (K) is one of the three core macronutrients, and consequently, deficiency symptoms manifest relatively quickly in tobacco. Potassium is a mobile element, which means it will translocate from mature tissues to the younger tissue where it is needed. This movement of K from older to younger foliage is what causes deficiency symptoms to develop first on the lower foliage.

Potassium deficiency symptoms begin as a mild chlorosis and mottling of the leaf margin. Since K is vital to leaf expansion, the edge of the foliage curls in and downward, resulting in an umbrella like shape (Fig. 1). In addition to marginal interveinal chlorosis, mottling, and leaf deformation, a K stressed plant exhibits a general stunting of growth (Fig. 2). 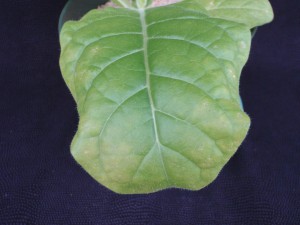 As K starvation continues, interveinal chlorosis and mottling advance from the leaf margin moving toward the center. As symptoms progress, the marginal spots will expand in size and eventually become necrotic (Fig. 3). 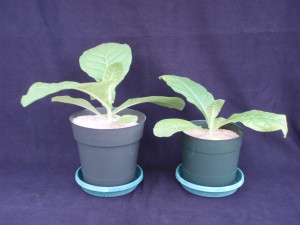 Figure 2. A healthy tobacco plant on the left as compared to a K deficient plant on the right.
©2016 Forensic Floriculture 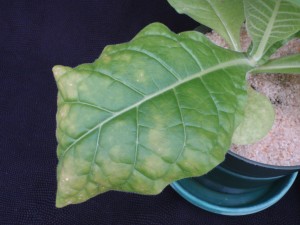 When tobacco experiences a severe potassium deficiency, “firing” symptoms will appear. This unique and fascinating indicator appears as extremely chlorotic or even blanched foliage that is brittle in texture and appearance (Fig. 4). The fired leaves may experience loss of leaf tissue as the brittle, necrotic tissue breaks away. As potassium deficiency persists, the symptoms will continue up the plant into the next level of foliage. 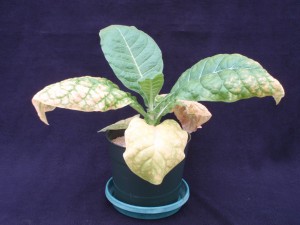 Figure 4. Firing of the lower leaves, note progression of symptomology (firing and blanching, sever chlorosis and necrosis of the margin, and beginning yellowing of the leaf margin) as it moves up the plant.
©2016 Forensic Floriculture

Figure 5. The 360-degree view of this symptomatic plant with a severe potassium deficiency may be viewed by clicking on the above picture.
©2016 Forensic Floriculture