Find this article at:
go.ncsu.edu/readext?419824
— Written By jbhenry2

In this tobacco research update, we highlight the symptoms of nitrogen deficiency. These images are part of a project supported by the North Carolina Tobacco Foundation to develop a web-based diagnostic key for the identification of nutrient disorders of tobacco.

By far, nitrogen (N) is the most widely applied nutrient for plant growth. It should come as no surprise, that symptoms of nitrogen deficiency are readily induced in plants.

In tobacco, one of the first indicators of limited N is slowed growth (Fig. 1). Plant growth stalls and leaf expansion does not occur. Visual symptoms of N deficiency quickly follow. When N supplies are limited, the plant will reallocate N from the lower leaves to the upper leaves, due to the fact that N is a mobile element. This is the reason why symptoms initially develop on the lower foliage. 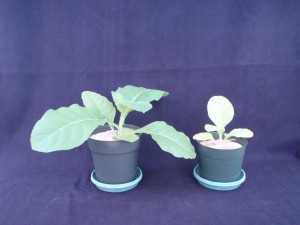 The initial symptom of N deficiency is a paler green coloration of the lower leaves (Fig. 2). The progression to more advanced symptoms readily occurs when N is unavailable to the plant. Pale green leaves will begin to change to a light yellow, that becomes progressively more bleached over time (Fig. 3). These symptoms may be observed in the attached continuously rotating image (Fig. 4, click image to play video). Ultimately, these bleach-yellow leaves will turn brown (senesce) and fall off the plant. 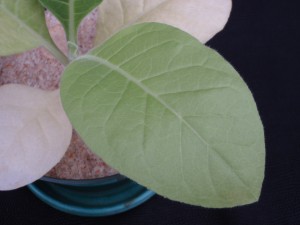 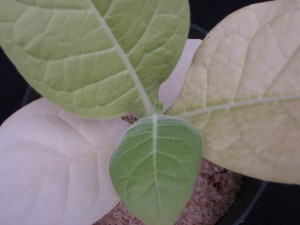 Figure 3. The progression of symptoms can easily be observed on this burley tobacco plant. With this advanced stage of symptoms, the initial pale green coloration is seen on the upper leaves, that gives way to a yellowish-green coloration on the next leaf down. As symptoms progress further, the leaf turns yellow, which is visible with the third leaf from the top. Ultimately the leaf turns a bleached-yellow coloration, as seen on the lowest leaf. The final stage of development occurs when the leaves senesce and fall off the plant.
©2016 Forensic Floriculture

Figure 4. These symptoms of pale green coloration of the upper leaves, and severe yellowing and beaching of the lower leaves may be observed by downloading the above .gif file. This image provides a 360-degree view of a symptomatic plant.
©2016 Forensic Floriculture