Find this article at:
go.ncsu.edu/readext?408255
— Written By Matthew Vann

Once again, it’s been a week or so since our last update. Things have been very, very quiet across the state as most everyone prepares for transplanting. The last article we posted outlined the considerations that should have been made for estimated dates of transplanting. For most regions of the state we’re well past the estimated frost-free dates; however, the cool nights continue to linger and that fact (coupled with last week’s rainfall) has delayed transplanting until this week (4/18-4/22). Daily temperatures are expected to reach the upper-70’s and mid-80’s in the Triangle, which is good, but nighttime temperatures will continue to plummet into the upper-40’s and low-50’s for other areas. Producers should note that flue-cured tobacco grows best when nighttime temperatures are above 65°F. Having said that, these nighttime temperatures certainly will not prevent most producers from setting the crop. Knowing that we’re away from freezing temperatures, I’d estimate that the bulk of the crop will be transplanted over the next two to three weeks. Bottom line, we’re coming into the last couple weeks of April, so it’s time to go!

As we finish the greenhouse season, there are still a few points to keep in mind from a disease control standpoint. First, sanitation is still going to be key as we transition to field production. There are very few fungicides labeled for greenhouse use, so pesticides are not really an option for most diseases that we may face at the present time. Good sanitation will also help in preparation for next year’s greenhouse season by reducing inoculum presence and carryover/over wintering. Second, Collar Rot was identified in a greenhouse last week (Figure 1). Producers are encouraged to keep plant clippings off of seedlings and discard them a minimum of 100 yards from any greenhouse. It’s also advisable to keep greenhouses properly ventilated and plants floated as high as possible to promote air movement through the seedling canopy. These two practices will help ensure that tray surfaces are relatively dry, thus reducing the potential for disease infestation. Additionally, it is advisable to remove any infected transplants (and trays) from the greenhouse as this practice will remove the inoculum and, hopefully, stop the spread. It is equally as important that diseased seedlings are not transplanted. 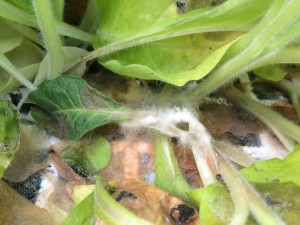 Speaking of disease control, there have been a number of questions raised regarding the correct application rates and timings for Orondis Gold 200, the new Black Shank fungicide labeled for field use. First and foremost, Orondis Gold 200 is the ONLY material containing the active ingredient oxathiapiprolin labeled for use in tobacco production. Second, it can only be applied as a tankmix with Ridomil Gold SL. This is why producers interested in purchasing Orondis are required to buy a co-pack of Orondis Gold 200 and Ridomil Gold SL. Beyond this fact, producers can only make one application of Orondis per season: once in the transplant water OR once after transplanting (first cultivation or layby). Labeled rates of both materials will vary depending upon where a grower chooses to include the material in a management program. Labeled rates of both materials are listed in the table below. It should be noted that referenced application rates are derived from Section 2(ee) labels for Orondis and Ridomil. The full Orondis Gold 200 label does not apply to tobacco production for the 2016 season. Alternativley, producers using Ridomil Gold SL as a standalone material (without Orondis Gold 200) should follow its full label. Lastly, Presidio is another option for chemical Black Shank suppression. Producers can apply this material at 4.0 fl. oz./acre AFTER transplanting, either at first cultivation or at layby as long as it is preceded by another material. This labeled application is slightly different from 2015, so it is important that the most recent label is followed. Overall, the news for Black Shank control is better than we’ve had in years as growers now have access to three different products (Orondis Gold 200, Presidio, and Ridomil Gold SL). I fully expect that producers will explore different combinations of these materials in 2016 considering the Black Shank issues that were observed in 2015.

That’s all for today, but be sure to check back with us to see how transplanting is going around the state.