Find this article at:
go.ncsu.edu/readext?405041
— Written By Matthew Vann

We’re back today after missing last week. It’s been fairly quiet out there, thankfully that means there’s nothing of significance to report….at least for now. With that being said, April 1st will be here tomorrow and that means a few things for those of us involved in tobacco production. First, it means that all greenhouses in the state are seeded and that many have been clipped at least one time. Of course, the exceptions to this statement are some of the burley growers in the western region of the state. In fact, seeding of the tobacco greenhouse at the Mountain Research Station in Waynesville is wrapping up as we speak. Second, it means that many growers are preparing fields for transplanting. Thanks to above average temperatures and much lower rainfall than was experienced in January and February, soil conditions are extremely good for CPA application and tillage/bedding. I think this is a rather pleasant surprise given the soil conditions just a few weeks ago.

Knock on wood, the greenhouse season has been very good so far and I don’t see where we’ll come up short on transplants baring something completely unforeseen. However, as we come into the last few weeks of the greenhouse production, a few management reminders are likely in order. Plants should be clipped when total seedling height is 2.5 to 3 inches above the top of the tray. It is important to remember that seedlings should be clipped no lower than 1 to 1.5 inches above the bud. Clipping plants at this height prevents damage to the bud while also insuring that sufficient tissue is removed to slow stem elongation. The reduction in stem elongation allows for an increase in stem diameter, both of which result in better plant usability and hardiness. It’s also important to remember that after 5 clippings you’re only holding plants until transplanting, as stem diameter will not increase past this point. This is the time of the greenhouse season where the balance between seeding date and transplanting date comes into play, and it’s why we encourage producers to wait as long as possible to seed houses. Many producers clip 15 to 20+ times per season, which greatly increases the risk of disease infestation and spread. With no physiological benefit of 15 to 20 clippings, it just makes a lot of sense to try and tie all of this together in order to offset a lot of the potential risk. It’s also worth noting that growers should be sure to properly sanitize mowers between clippings and between greenhouses (if a single mower is used for multiple houses). Clipping is a great method to spread disease inoculum, so wash mower decks (top and bottom) and blades with a 50% bleach solution after use (and between houses). In addition, I know of many producers that sanitize mowers after a few passes within a single house. Sure, it takes a little more time and effort but knowing that we do not have access to pesticides that can control some of the greenhouse diseases we face, an ounce of prevention is worth much more than a pound of cure (because there are none…). I’d even go so far as to recommend that mowers be cleansed with clean water after treating with bleach to sufficiently remove bleach and additional plant residue. Clippings and media/plant waste should also be dumped at least 100 yards away from the greenhouse as disease inoculum can travel short distances and contribute to re-infestation.

In terms of transplanting and very good seedling growth thus far, I caution everyone to not be lulled into a false sense of security with the recent weather we’ve experienced. Air temperature has approached (and even passed) 80 degrees on a few occasions, but it’s still March. Historically, we’ve targeted the first or second week of April for transplanting to avoid a late frost. Keep this point in mind—we’re still not out of the “danger zone” just yet. In fact, there was a light frost in Raleigh last Tuesday morning (3/22) and I suspect this was the case in many places to the west. The table below provides estimates of the average frost free dates of selected tobacco growing regions around North Carolina (source: Katherine Perry, NCSU Department of Horticultural Science, “Average Last Spring Frost Dates for Selected North Carolina Locations”). The table also provides the standard deviation around these estimated dates, which tells us how many days later there is a 16% chance of a frost event. For example, in Mount Airy the estimated frost free date is April 22nd with a standard deviation of 13 days. This means that between April 23rd and May 5th there is a 16% chance that frost will occur. To put that in more practical terms, it means that during this time period frost will be seen two out of every 10 years. This information pairs very nicely with the accompanying figure which shows the normal minimum temperatures observed in every month of the year. When these two figures are used together we see that transplanting should begin in early April in the east and late April/early May in the west. So, with all of this information, here’s the bottom line, hold plants until as long as is reasonable and then take them to the field. This should push everyone (in the east) to the first or second week of April, nearly everyone in the western Piedmont to early May, and the burley belt to late May. If that be the case then we’re right on time for transplanting.

As always, if you have any questions, please feel free to contact your local Cooperative Extension Agent. 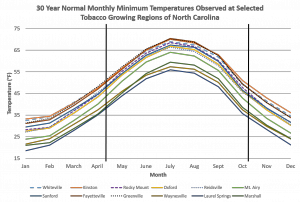