Find this article at:
go.ncsu.edu/readext?402780
— Written By Matthew Vann

Fertilizer materials continue to be major talking points with producer’s and Extension Agents. It’s safe to assume that many of these conversations are driven by significant declines in material and handling cost. With that being said, many producers are considering the idea of going back to fertilizer sources that were more commonly used a decade or more ago. There is certainly nothing wrong with this idea, as these are fertilizers that have stood the test of time; however, it is advisable to still give strong considerations to newer materials. I bring this up for one reason—profitability. It’s no secret that profit margins in 2016, regardless of crop, will probably be pretty tight, so giving thought to cheaper inputs (where appropriate) is still good practice.

The figure below outlines the estimated cost of selected fertilizer materials from 1990 to 2013 (source: R, Nehring; USDA-ERS). Unfortunately, 2013 is the most recent year that data were collected, so recent price declines are not represented. Most of the fertilizer sources listed in the figure are commonly used in tobacco production; the exception being Potassium Chloride or Muriate of Potash (MOP, 0-0-60). I’ve included MOP for reference, as 0-0-22 and 0-0-50 prices typically follow the same trend, though at a slightly higher cost. Additionally, Urea is listed because it is blended into liquid UAN formulations. Regardless, the figure demonstrates the volatility observed in the fertilizer market for the past decade. Fertilizer prices are very much influenced by energy prices as it takes large machinery and large scale industrial processes to mine, produce, and/or refine most of these materials. To me, that’s the major factor behind the large increases in prices from early 2008 through most of 2009 and the huge decline in prices for 2016. Energy prices are slated to be relatively stable for the next three to four months, but what happens beyond that is anyone’s guess. I mean, did anyone think we’d ever see gas cheaper than two dollars per gallon at the pump? 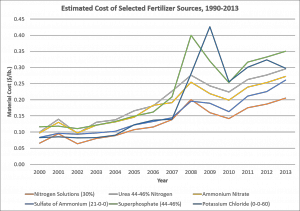 Back to fertilizer sources, when considering fertilizer materials for tobacco production it’s important to note that there are a number of options available to growers. I have to say that growers have explored those options rather extensively, and I’ve often used the saying, “Talk to 10 different tobacco farmers and you’ll hear 10 different fertility programs”. This is a point that I really like because it demonstrates the fact that we have flexibility in terms of fertility programs and it offers growers different options that fit very well into differing styles of management.

One example that comes to mind is that 50% of the North Carolina tobacco crop will receive a portion of its total nitrogen from a liquid source on an annual basis. In addition, 25% of the crop will receive all nitrogen in this form. That’s a major change from 20+ years ago when granular sources accounted for over 90% of the materials used for tobacco production. It’s no coincidence that liquid N sources (28-32% UAN and 24S) have gained in popularity since the cost per pound of material has been five to ten cents cheaper (sometimes more) over the past decade when compared to ammonium nitrate (price estimate based solely on USDA figures). An additional benefit of liquid N programs is the fact that they offer potential for reduced phosphorus application. Phosphorus (P) continues to be one of the most, if not the most, expensive nutritional input in many programs. Cost aside, roughly 85% of the tobacco producing soils in North Carolina do not need supplemental P as soil reserves are sufficient to adequately feed a flue-cured tobacco crop. Ultimately, P application is often times not required in many fields. To add to this statement, many blended fertilizers, such as 6-6-18 or 8-8-24, will be applied at a rate targeted to supply about one-half of the total nitrogen need for the season. When nitrogen is the targeted nutrient in this application, P application rates far exceed the 12-15 pounds needed by the crop. That’s certainly not a knock on blended nutritional sources, it’s just the fact of the matter. This is also not to say that a small amount of P at transplanting is not beneficial to the crop, as there are circumstances where 5 pounds of P2O5 in the transplant water does promote early season growth. However, one should realize that the 5 pounds serves as a “starter” of sorts by promoting P uptake when root growth is very limited by slow root growth from cool/damp soil conditions. Regardless, this application will adequately feed a crop until enough root growth occurs to fully utilize P reserves found within the soil profile.

One other factor that commonly comes into question is the debate over ammonium vs. nitrate nitrogen sources. The previous recommendation, dating back to the 1960’s and 1970’s, was that nitrogen sources with more than 50% ammonium nitrogen should not be used in tobacco production out of concern for ammonium toxicity. Research conducted in the mid-2000’s demonstrated the exact opposite as results consistently proved that sources with >75% ammonium nitrogen produced leaf of identical yield and quality (and value, leaf chemistry, etc.) as sources containing 100% nitrate nitrogen. The driving factor behind this observation is that ammonium is rapidly converted into nitrate when soil pH falls within the recommended range of 5.8-6.2. Other driving factors responsible for this process (known as nitrification) are warm soil temperatures and good soil moisture. Of these three parameters, temperature and moisture are not typically limiting factors (for nitrification) in our region, because radiant summer heat continuously diffuses into the soil and periodic rainfall or irrigation will replenish soil moisture. In addition, soil pH is a factor that all producers have control over through frequent applications of agricultural lime—applications based on soil testing, of course! To further this point, when I look at soil test reports from North Carolina I see that nearly 75% of tobacco producing soils have a pH above 5.5 (source: NCDA Agronomic Division). This means that most of our soils are maintained well enough that nitrification should not be a limiting factor based upon soil chemistry. This, in turn, means that producers should consider a number of nitrogen fertilizer sources and should not express hesitancy with using what might be considered “alternative sources”. For more information regarding acceptable nitrogen sources, see chapter five of the 2016 NCSU Tobacco Production Guide.

So what’s the take home message? The take home message is this: as a tobacco producer you have access to a number of acceptable fertilizer sources, all of which will vary rather significantly in cost. The goal of our recommendations is to consider all options at your disposal and choose those best for you.