Find this article at:
go.ncsu.edu/readext?400236
— Written By Matthew Vann

The first week of March has delivered unseasonably warm and sunny weather, which is much needed relief for most of North Carolina. The State Climate Office estimates that rainfall totals over the past 60 days (January 1st to March 1st) are three to nine inches above normal, depending upon location. Over the past few days it’s certainly likely that some drying has occurred in fields throughout the state. Unfortunately, we need much, much more warm/sunny weather to improve overall soil conditions–fortunately, we still have a little time before field work needs to take place. Though I did see a social media post today where a farmer in the Coastal Plain was bedding/fumigating some fairly sandy land. This is the first evidence of field work that I’ve come across and I’m very happy to see that some are starting to make a move for the 2016 season. 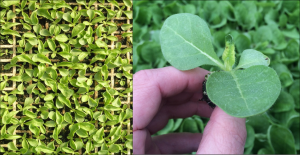 With that being said, the warmer conditions recently experienced are expected to give way to nighttime temperatures hovering at or very near 32 degrees. It is during this time that growers should be very much aware of the threat of cold injury (shock) that might impact young seedlings. It has been our experience that the vast majority of cold injury is a result of a rapid decline in ambient temperature as the sun begins to set. This scenario is one typically found when warm daytime temperatures are experienced, thus causing greenhouse curtains to lower. As ambient temperature falls, cold air rushes into the greenhouse resulting in a quick loss of radiant heat and subsequent temperature reduction by as much as 30 to 40 degrees. This is relatively extreme, but not uncommon. The rapid decrease in temperature can result in cold injury–really cold shock–to the young/tender seedlings. Fortunately, this is transient and should disappear within a few days, assuming warm conditions are kept within the house. In addition to cold shock, there can be cool spots within a greenhouse which can induce cold injury as well. Cool spots within a greenhouse are typically found adjacent to the sidewalls or curtains of the house, as there is very little insulation to prevent cold diffusion inward from the outside environment. Other cool spots might be found when air circulation within a house is less than ideal in the center of the house. This is yet another reason why fan placement, and even fan angle, are extremely critical to warm air movement. Regardless, consecutive days of warm temperatures or perhaps adjustment of fans should be sufficient to address this issue. All of this is important to consider, specifically since it is okay to allow greenhouse temperatures to fall as low as 55 degrees (gradually) after maximum germination is reached.

It was also promised in the last post that we would address how to manage dry cells after floating trays. To understand why dry cells occur, which is relatively rare, one must have a little background as to the composition of the soilless media used for transplant production. Most tobacco greenhouse media is a composition of peat moss, vermiculite, and perlite (as well as liming materials and trace amounts of fertilizer). Different tobacco media sources will have differing ratios of each material, all of which are acceptable for production; however, the focus of this post will be to peat moss composition. Peat moss is mined, or harvested, from ancient peat bogs located in temperate climates. Peat is naturally hydrophobic (water resistant); therefore, a wetting agent must be added to a mix to give the media the wicking properties needed for the tobacco float system. Over time this wetting agent can deteriorate, thus bringing back the natural water resistant properties of the peat moss.

This is the number one reason why fresh or new media is recommended for use every season. Old media or leftover media should NOT be purchased or even mixed with fresh media in hopes of saving a few dollars. Time and time again this has been 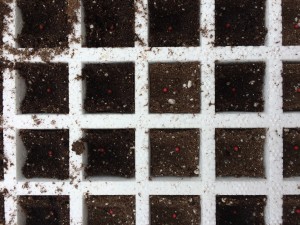 A tale of two cells: one wet and one dry.

attempted, with all efforts ending in the same result–dry cells found in sections of a greenhouse. In new media, dry cells are commonly attributed to the media not completely filling all the way to the bottom of the tray cell, thus creating a gap between the water and the media. Agitating or screening media as seeding line hoppers are filled will allow for more uniform tray filling. The take home message is that these issues are caused by two separate factors the first being media chemistry (deterioration of the wetting agent in old media) and the second being physical properties (cloddy or excessively moist media). Of these two scenarios, the first requires a lot of extra management to overcome, while the second does not require any significant effort in most seeding lines. I’d also like to point out that the moisture content of bagged media is typically right where it needs to be (assuming it is relatively fresh and the bag is undamaged) so producers probably do not need to add moisture. By not adding water to the mix, the sticky, cloddy properties aren’t really a problem and media flows very well into the tray.

It is important to remember that a dry cell does not contain the necessary moisture needed to dissolve or loosen the seed pellet for germination. However, as was previously mentioned, even with new media it is not entirely uncommon to find a few dry cells scattered at random throughout a greenhouse. I wouldn’t lose a lot of sleep if one or two are found in every handful of trays, but growers often ask questions about how to best address this issue or to hedge against it. Luckily, a simple overhead application of water will usually do the trick. It doesn’t take much water to accomplish this, but producers are cautioned not to use high pressure  (seed and media can be displaced) or to completely flood cells, as too much water is just as bad as too little. The bottom line is this, overhead water application allows water infiltration into the cell and can induce wicking, once wicking occurs it will remain. It’s best to allow some pooling of water within a cell so that moisture is essentially forced downward or absorbed into the media. Slight pooling in wicked cells is likely to be observed, but should disappear over time because water will move downward into the cell. When addressing dry cells, make an application of sufficient water quantity to allow for slight pooling within the cell then come back about 24 hours later to see if another water application is justified.

Again, dry cell is typically not a significant issue for most producers who are using new media, but it can be found. One example is where new Styrofoam trays have been utilized for seedling production. Dry cells are more common in new Styrofoam trays compared to older ones because they typically weigh less when filled with media. Old trays tend to shrink with age, and as shrinkage occurs individual cell size increases, thus allowing for a larger volume of media per tray. It is the increase in media volume per tray that makes these trays heavier, and a heavier tray will float slightly lower in the water profile. Another issue with new Styrofoam trays is that static can cause media to “cling” to the tray cell wall, preventing it from falling to the bottom of the cell. To break the effect of static, I have heard of growers dipping trays into clean water prior to seeding. This certainly adds one more step to a very tedious process but I cannot find fault with it because it works. To go even further, I’ll never recommend that producers not purchase new trays as needed since the benefits of new trays (reduction of disease carryover and possible NTRM issues) far outweigh the fairly uncommon issue of dry cells.

Overall, I’m probably putting too much emphasis on something that tends to not be a major issue, but that’s part of our role with Cooperative Extension–we provide solutions and timely, unbiased information to the tobacco farmers of North Carolina.