Find this article at:
go.ncsu.edu/readext?376292
— Written By Jeremy Slone and last updated by Carol Hicks 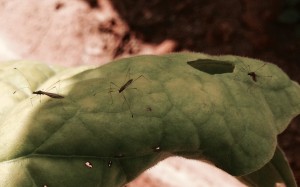 We observed both a decrease in flea beetle populations and an increase in predators this week at our remaining on farm site. Only two plants had signs of aphids, but neither had large enough populations to be considered infested. We saw quite a few stiltbugs this week and even a praying mantis on one plant. Plants that have aphid populations often have several stilt bugs, which are predatory on aphids. We have noticed that trend at this site in recent weeks and although we aren’t seeing many aphids at this point, the stilt bug populations are still thriving.

We also have not seen hornworms present in fields recently. While it is possible for some late season caterpillars to be present in fields, most are preparing to pupate and overwinter in the soil. Also, we are seeing a few grasshoppers, but none were found on plants at any of our stops. 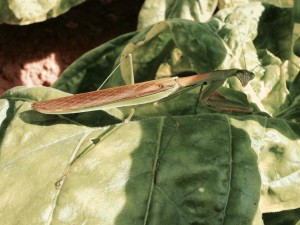