Find this article at:
go.ncsu.edu/readext?368209
— Written By Jeremy Slone and last updated by Carol Hicks 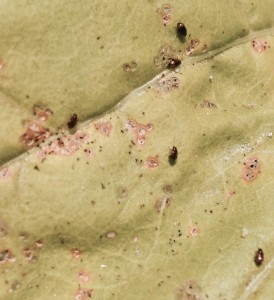 We are seeing a slight increase in flea beetles at some sites, but population sizes remain well below threshold levels. The image above shows flea beetle and holes caused by their feeding which have a lace-like appearance. For large plants post-topping, the flea beetle threshold increases to 60 beetles per plant. Although it may be difficult to observe that many beetles per plant, while scouting this week we did see as many as 30 beetles on a single plant. Many sites are harvesting now, so the lower leaves are being removed which makes it easier to inspect plants.

One of our Piedmont sites will be treating this week for hornworms as we were at 26% infested plants in both the IPM and the standard field at that location. We are still below threshold at all of our other sites. 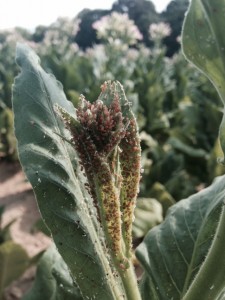 Although aphid pressure remains high at the Oxford research station, we have yet to see any aphid infestations at our on-farm sites. The photo above shows how aphids can quickly result in a heavy infestation under favorable conditions. The photo below is a few other insects we saw this week while scouting. Higher predator and parasitoid species diversity may help to control pests due to differences in feeding behavior. Using better target-specific insecticides to only control the pests that are present in the field will help to promote this diversity. Another project in our lab is investigating this diversity in organic tobacco production as a supplement to chemical control. 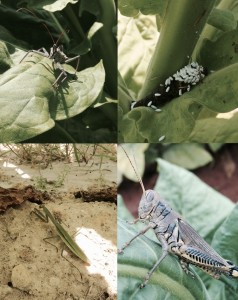