Find this article at:
go.ncsu.edu/readext?373232
— Written By Jeremy Slone and last updated by Carol Hicks 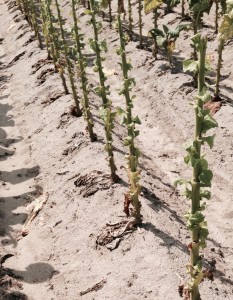 While most of our sites are into the second or third priming, two of our on farm sites completed harvesting this week. Both sites are located in the eastern part of the state, in areas that are typically done earlier in the year.

Similar to recent weeks, we are not seeing much insect pressure at any site; however, at our sites where the leaves are allowed to mature longest before harvesting, we are beginning to see more extensive lacing due to flea beetle feeding among even the top leaves. Sites where large leaves are still present near the base of the stalk have the same characteristic damage as well. It may seem like there is a resurgence of flea beetles late in the season, but it is likely not the result of any resistance development. It is more likely a late generation of adults just now emerging from the soil. Many remedial treatments have too long pre-harvest intervals to warrant sprays at this point. Increasing concern over pesticide residue on dried leaves may further incentivize not spraying for pests such as flea beetles this late in the season.