Find this article at:
go.ncsu.edu/readext?371143
— Written By Jeremy Slone and last updated by Carol Hicks 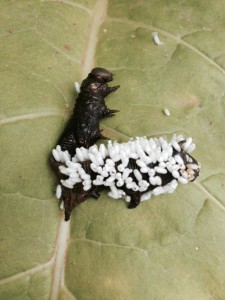 With harvesting well underway, we are now able to observe how insects distribute themselves on the remaining foliage in the final weeks. Hornworms and budworms have a preference for younger leaves and as such will often be found near the bud or, later in the season, suckers. We are seeing very low pressure from caterpillar pests across all of our on-farm sites at this point; however, the same is not true for the plants in our research station trials.

One experiment is focused on assessing insect management challenges in tobacco grown for biofuel production, and some treatments include plants which have had no chemical sucker control. Plants with suckers and younger tissue are preferred for egg laying, and plots where suckers are not being managed have had higher egg counts. The mortality of newly emerged larvae can actually be quite high, however the number of eggs will not reflect larval pressure. Therefore, we are not recording egg counts. This does still reinforce the point that timely weed and sucker management can help control insect populations both by limiting food supply as well as by limiting preferential egg laying locations.

With the exception of the Oxford Research Station, we still have not observed aphid infested plants at any of our sites. Aphids are typically controlled early in the growing season by imidacloprid applications in the greenhouse or at transplant, but residual control wanes as the plant grows larger. Later season control can be tricky, but this past summer has been particularly hot and dry which may have helped to reduce the success of any new infestations.

Lastly, I wanted to address the range of flea beetle counts we are observing. Within a given field we are seeing very high variability, such that one plant may have a single beetle whereas in another part of the field a plant may have 25 beetles. It can be very difficult to get accurate counts of such a small pest, especially one that is quite mobile. Some variability in our data may be attributed to this difficulty, yet even between fields at the same site we are seeing high variability. The plants where we are seeing the highest pressure have beetles on leaf tissue closest to the stalk, particularly at the junction of the leaf to the stem or along the mid-vein of the leaf. These areas as well as any leaf tissue that remains on the stalk after harvesting the leaf are where we are observing our highest counts. At this point in the season, such damage is not going to reduce yield because much of the damage is restricted to what remains of leaves that have already been harvested. Additionally, the leaves remaining on the plant will likely not accumulate significant damage before they are also harvested.