Find this article at:
go.ncsu.edu/readext?364265
— Written By Jeremy Slone and last updated by Carol Hicks 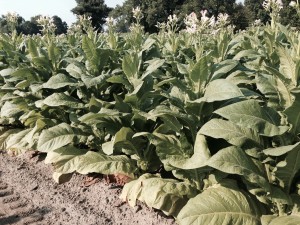 This week we saw an increase in budworm pressure across nearly all sites. Given that some sites will be topping their plants in the coming two weeks, it is not warranted to make treatments solely for budworms at those locations. Even though some sites were at threshold, we will continue scouting and make treatments if necessary in the future, post-topping. Furthermore, although we aren’t reporting it on this post, we are seeing parasitized budworms as well. This is a good sign and suggests that parasitoids are successfully finding budworm prey at most of our sites. 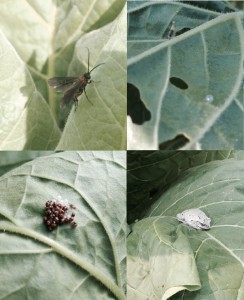 Above is a photo of several insects we have mentioned in previous posts without accompanying images. This image shows the red tailed wasp which is a parasitoid of caterpillar pests, a newly emerged hornworm and egg, as well as newly emerged stinkbugs and their eggs. Opposed to stinkbug egg clusters, caterpillar eggs are laid singly and on the part of the plant most suited to newly emerged larvae. Although the frog is not a pest, we have seen a few on the plants where we’ve stopped at multiple sites this summer. It’s possible they may help control pests as well. 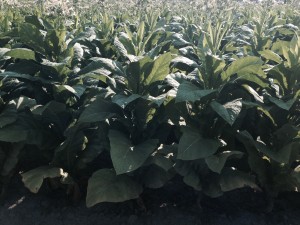 Lastly, an additional component of this project is to determine the speed and accuracy of alternate scouting methods. Current recommendations suggest that you cross a random number of rows and then continue down that row a random number of plants before stopping to inspect for pests. This is a problem later in the season when the plants are so large that it becomes difficult to move across rows. In the photo above, you can see how it may not be ideal to have to force your way around plants at the risk of damaging leafs or stalks. At the end of this season we hope to have an idea of the efficacy of at least one other method.