Find this article at:
go.ncsu.edu/readext?367065
— Written By Jeremy Slone and last updated by Hannah Burrack 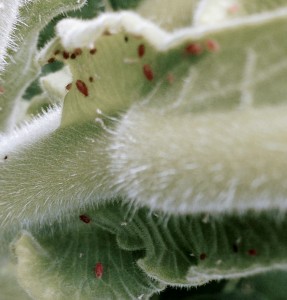 Thanks to everyone who made it out for the Tobacco Tour, we hope you enjoyed learning about some of our research! We visited our IPM on-farm site in Granville county later in the day, so if you attended you saw a little bit about the logistics of our experiment. Don’t hesitate to shoot us an email if you have any questions or suggestions!

We did not see heavy pest pressure at any of our fields while scouting this week, but we did get some much needed rain at a few sites. We have started seeing aphids at the Oxford research station for the biofuel project, but we haven’t seen aphid infested plants at any of our on-farm sites. A plant is considered infested with aphids if 50 aphids can be counted on a plant. The reason the threshold is so large is because aphids reproduce clonally, and many colonizing aphids fail to successful establish on a given plant. The first winged aphid that makes it to the plant begins to produce the first round of non-winged clones. They are two color forms of the aphids that feed on tobacco, green or red, but most often you will see the red form in NC tobacco. Aphids avoid nicotine toxicity by feeding within the plants food supply (phloem) rather than the water supply (xylem). However, some work has been done to evaluate aphid tolerance to nicotine, and another project in our lab is currently investigating aphid resistance to neonicotinoid chemicals such as imidacloprid. Some evidence suggests that some populations of aphids may be developing resistance to this greenhouse treatment in different regions of NC.

Although we are still seeing flea beetles at most sites, the threshold for this pest increases to 60 beetles per plant post-topping. Whereas many of the tobacco pest thresholds may be conservative (10% infestation of hornworms and budworms) this threshold may be too liberal and actually difficult to observe in the field. Assessing flea beetle damage may prove to be more effective in situations where such a treatment would be warranted. This has not been assessed experimentally, but most sites will not reach these population levels regardless due to other standard practices.