Find this article at:
go.ncsu.edu/readext?366270
— Written By Jeremy Slone and last updated by Carol Hicks 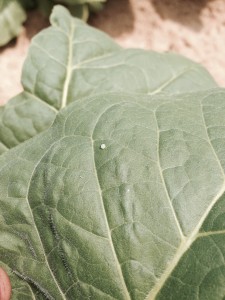 This past week we were out scouting after the large storm passed through the Eastern part of the state. We made almost no pest observations that day, which is likely due to the severe weather but may also be attributed to recent chemical treatments at certain sites. In contrast, we saw a dramatic increase in hornworm larvae in the Eastern part of the state around mid-week. Many larvae were still on the same leaf as their egg. Newly hatched larvae have a very high mortality, so it’s possible that many of these will die or be parasitized. We didn’t see this increase across all of the Piedmont sites, but we may as the adult moths move throughout the state. Hornworm eggs are visible without magnification, blue to slightly green in color, and are typically laid on the upper-side of leaves in the upper two-thirds of the plant. The initial damage to the leaf may resemble flea beetle damage, but hornworm feeding will gradually result in larger holes with irregular edges while flea beetle damage will have a more “lace-like” appearance and is largely present on the lower leaves. As hornworms develop they eat increasingly more plant material and can defoliate entire plants rather quickly at later larval stages.

It takes less than a month for a hornworm to go from hatching to the pupal stage. Early generations result in adults after about another two weeks while the later generations will pupate under the soil but enter diapause (hibernation for insects) to emerge the following year. See more info on hornworms. At this point, nearly all budworm observations are of large larvae moving down the plant. We also saw several aphid infested plants while scouting our biofuel project at the Oxford research station. A plant is considered infested with aphids if there are more than 50 adults and nymphs on a leaf. A single female will colonize a plant and will rear clone offspring without the need for finding a mate. Due to this, a few aphid infestations can result in large populations very rapidly.

Next week is the NC State Tobacco Tour and we will be presenting some details about this project as well as the research station biofuel project. We hope to see you there!

[Eastern 1 & 2 were scouted soon after the rainstorm early in the week. We didn’t make any pest observations during scouting, which may partially be attributed to the weather.]

[Eastern 1 & 2 were scouted soon after the rainstorm early in the week. We didn’t make any pest observations during scouting, which may partially be attributed to the weather.]