Find this article at:
go.ncsu.edu/readext?365085
— Written By Matthew Vann

Over the past week or so we’ve received a number of phone calls, emails, and text messages asking about irregular/abnormal leaf growth and bud development. It’s safe to say that nearly all of these conversations have turned out to be Calcium (Ca) deficiency. Calcium deficiency is characterized by downward cupping/hooded bud and tip leaves (Figure 3). Generally, affected leaves have ruffled or scalloped margins and/or pinched leaf tips that can curl downward (Figures 1-5). Calcium deficiency begins in the growing points of the plant, therefore, it is observed in the bud or in younger leaves. Once absorbed from the soil, Ca is not plant mobile as it is incorporated into the cell wall and cannot be released. While deficiency of any nutrient is not ideal, it is rare that Ca deficiency would cause any concern and it is not uncommon to find every season.

It is important to understand that Ca deficiency is not reflective of low amounts of Ca within the soil profile. In fact, the NCDA&CS Agronomic Division indicates that >80% of the tobacco producing soils in North Carolina have greater than 45% of the CEC occupied by Ca. This information indicates that Ca is one of the more dominant nutrients found in our soils, specifically when pH falls within the recommended range of 5.8-6.2 for tobacco production. Therefore, the issue of Ca deficiency reflects a shortage of the nutrient within the plant rather than a shortage within the soil. Calcium deficiency is most often observed at or very near the button stage of growth following periods of rapid plant growth. During periods of rapid plant growth, Ca uptake through the root system cannot adequately supply the demand in place by the above ground vegetation. Calcium is absorbed from the soil by actively growing root tips and it is possible that during the rapid growth phase experienced over the past 2-3 weeks, resources within the plant have supplied leaf and bud growth more so than root growth. With a decline in root growth, a decline in Ca uptake would occur as well. In addition, Ca concentration around plant roots will have declined. Additional root growth will correct this issue in two ways: 1.) actively growing roots are the mechanism for Ca uptake and 2.) new root growth means a larger root system, and a larger root system will extract Ca from areas within the soil profile that have not been previously utilized. These two factors are the things contributing to Ca uptake, additional applications of a calcium fertilizer (soil or foliar applied) will not help and can be very costly.

The next logical question is then, “how do we induce more root growth?”. That question has a very simple answer: top the plant as soon as it is ready. Research has shown that early topping can increase root mass by as much as 40% and late topping by as much as 12% compared to plants left with tops remaining. In addition to stimulating root growth, topping is likely to remove a large portion of the affected leaves.

Knowing what the issue is and how it can be corrected, the big question becomes “why is it so widespread and why this year more than any other?”. To answer that question, we need to step back and think about the tobacco plant and the weather experienced this season. Most of North Carolina experienced record breaking high temperatures during the month of June. Furthermore, while it has been historically dry in some areas of the state, other areas have received (somewhat) timely rainfall. Tobacco is a tropical plant that performs best in hot, humid weather; both of which have been experienced in sufficient quantity this season. As long as soil moisture is not limiting, the warmer and more humid it is, the faster the plant grows. Simply stated, conditions have been right for rapid plant growth over the past 2-3 weeks and in most areas that growth has finally pushed us to the button/topping stage. Again, during this stage most of the plants resources have been placed into leaf development to meet growth demand. The partitioning of resources has coincided with the decline in root growth; therefore, the perfect storm for Ca deficiency has occurred.

As growers move through this issue, it’s important to keep in mind that this is a weather related problem. This deficiency has been observed across varieties, soil types, growing regions, and fertility programs. Producers should continue to follow production recommendations from the North Carolina Cooperative Extension Service. 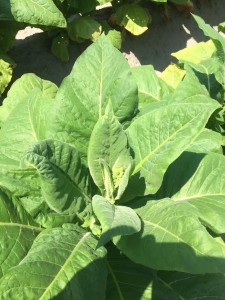 Figure 1. Early signs of Ca deficiency in young tip leaves, as noted by extreme pointing of the leaf tip. 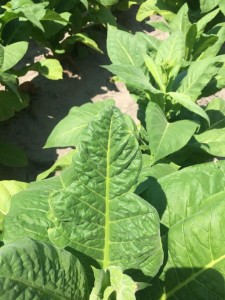 Figure 2. Calcium deficiency in slightly older bud/tip leaf, as indicated by the pinched leaf margin near the leaf tip. 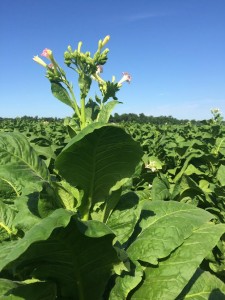 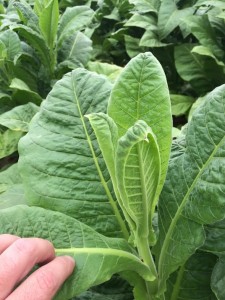 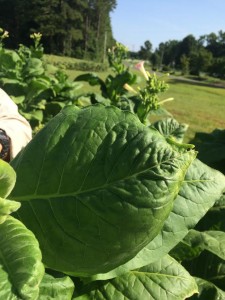 Figure 5. Calcium deficiency. Note the rounded leaf look, as opposed to the normal oblong shape, and the pinched leaf tip.