Find this article at:
go.ncsu.edu/readext?360148
— Written By Jeremy Slone and last updated by Hannah Burrack 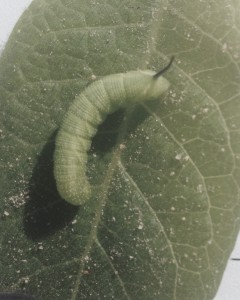 The week-long rain and cloudy weather may have impacted insect populations this week. However, we are starting to see both budworms and hornworms in several places. Some sites still have very little signs of damage, but towards the eastern part of the state we are noticing sporadic signs of damage throughout the field.Desite signs of damage, we are not observing many live worms, which means that populations are still below threshold and do not require treatment. For budworms and hornworms, the current recommendation is to treat when 10% of plants are infested.

At some locations, we observed more flea beetles than in the previous weeks, but in the fields with larger plants we are actually seeing less flea beetles. At this point in the season the current threshold is an average of 4 beetles per plant. Later in the season as the plants grow larger this threshold changes to an average of 60 beetles per plant.

Relatively high thrips populations were also observed in many locations, but this populations do not justify treatment. We made similar observations last year, and posted about why treatment wasn’t necessary.

Many of the non-pest insects we were seeing in previous weeks have already dispersed are no longer in our observations.