Find this article at:
go.ncsu.edu/readext?363184
— Written By Jeremy Slone and last updated by Carol Hicks 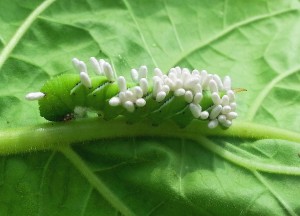 We are seeing different population densities of both hornworms and budworms across all sites as a result of chemical treatment, plant age/size, and regional differences. Typically you would see hornworms later in the season and feeding on the upper 2/3 of the plant; where as, budworms are often a pest earlier in the season and restricted to tightly closed buds and the upper most leaves of the plant. Our observations to date would suggest it may have been an earlier flight of hornworm moths this year and the warm weather likely helped with larval development.

If you are personally scouting your fields, it is important to actually inspect the buds of the plants where you make stops. You may need to physically separate the leaves to notice smaller budworms (and even some of the larger ones!) which will hide in the very tight spaces to feed on the newest plant tissue. Newly emerged budworms are very tiny, but leave characteristic damage to the leaves surrounding the bud and you should see the “peppery” frass as well.

To the East the plants are blooming and nearly past the point of concern for budworms. However, at our Piedmont sites we are still seeing plant growth while very few plants are at the button or bloom stage. We anticipate heavier budworm pressure at our Piedmont sites in the coming weeks, and heavier hornworm pressure to the East. So far only two sites have treated their IPM field, Belt at one site and Coragen at the other. Both are effective for controlling caterpillar pests, and have similar modes of action (Group 28) but different active ingredients.

We are seeing stiltbugs at all sites and these are predatory on caterpillar pest eggs as well on smaller larvae. We’ve seen some red tailed wasps (budworm parasitoid), as well as actual parasitized budworms and even a few parasitized hornworms. These are evident by the appearance of cocoons either along the back of a hornworm or encapsulating what remains of a budworm. Seeing pests that have been parasitized is a good sign, as it means that any adult parasites that emerge from these cocoons will likely distribute themselves within the field. Although we are seeing heavier stinkbug pressure at one site, they normally do not necessitate a chemical treatment.

Check back next week for more updates.