Find this article at:
go.ncsu.edu/readext?358150
— Written By Jeremy Slone and last updated by Hannah Burrack 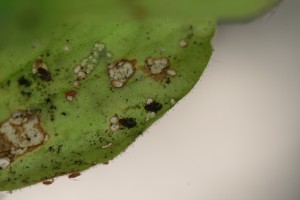 Similar to previous weeks, we observed very little activity across all sites this week. Some stands appear to be showing signs of disease or phytotoxicity from treatments, but  plants are beginning to grow well. We did observe one newly hatched hornworm this week in the eastern part of the state, but it was observed outside of our scouted area. This observation suggests that there was an early flight for some hornworm moths, and given the high mortality for newly emerged hornworms it is likely the one we saw will not survive. We have observed spiders and other predators in the fields which are helping to control some of the early season pests. Although no reported live flea beetles have been observed at some sites, we did observe dead beetles at some of our stops in all fields. This means that greenhouse treatments are also still present in the plant and are providing protection.