Find this article at:
go.ncsu.edu/readext?298335
— Written By tcmclamb and last updated by Hannah Burrack 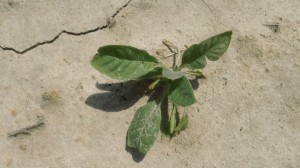 It is week two for scouting in our Eastern 1 and 2 research fields. In order to  potentially reduce pesticide use, grower costs, and pesticide residue in cured-leaf, research is being conducted at three locations throughout North Carolina; two in eastern North Carolina, and one in the Piedmont. Using Integrated Pest Management, we hope to achieve these goals with weekly scouting reports and monitoring, both in IPM fields and grower standard fields. View last week’s scouting report.

Soil conditions are drier than last week, but flea beetle numbers have increased in this week’s report. They are still below threshold, however. This week’s scouting reports resulted in the following:

Notes: Most flea beetles, in both the IPM and growers standard field, were sluggish and mostly non-active upon observation, most likely from the imidacloprid treatment in the greenhouse prior to transplant.