This week, I have received several questions about possible phytotoxcity associated with insecticide applications directed against tobacco budworm. The three seperate phone calls and emails each involved a different insecticide (all caterpillar materials), and  different application methods. 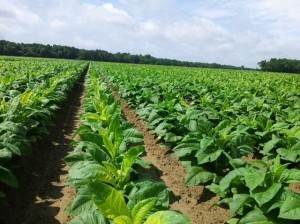 1. We do not want to apply insecticides to the same part of the plant as we do fungicides or sucker control.

Insecticides to manage tobacco budworms should be applied as a directed spray into the bud, ideally in between 15 to 30 gpa water. In the early season, fungicides, if necessary, should be applied to acheive good coverage on leaves to target foliar pathogens. Sucker controls, on the other hand, should be applied to acheive goodstalk  run down. Although it might be temping to mix insecticides in early contact treatment to target tobacco budworm, treating budworms close (within 1-2 weeks) to topping does not make economic sense as the plant parts that budworms are feeding on will be removed when plants are topped. Post topping, insecticides for tobacco flea beetle and tobacco/tomato hornworms should be applied to leaves, not stalks. Therefore, tank mixing insecticides for these pests with sucker control materials will not result in good control. Growers often say that tank mixing “saves them a trip across the field”, but if the materials are not applied in a way to acheive good control, they haven’t saved a trip, they might have simply added the cost of an insecticide! Growers may also feel that some insecticides are “cheap”, so adding them to another material doesn’t cost much even if control is not optimum. Some insecticides may be less expensive, but they are not free! There is still an added cost that may not be justified by insect control or by yield benefits.

Because I do not recommend tank mixing insecticides with other pesticides in tobacco, I do not compare the effects of insecticides when tank mixed in my research plots. Therefore, I cannot say if insect control will be same when materials are tank mixed, nor can I say if there will be compatibility issues.

So, what caused the yellowing on the plants pictured above and at the other two sites? We have not seen phytotoxicity (yellowing, burning, flecking) associated with any of the insecticides labeled for tobacco budworm in the last five years. However, with the wet, hot conditions of the last two weeks, tobacco leaves are very succulent, and any sprayed on materials may result in some visible leaf effects if it doesn’t evaporate quickly. This should be transient and is not a concern for yield. Other issues (contamination, for example) can also cause injury like that above and should also be ruled out.