Find this article at:
go.ncsu.edu/readext?425609
— Written By jbhenry2

In this tobacco research update, we highlight the symptoms of magnesium deficiency. These images are part of a project supported by the North Carolina Tobacco Foundation to develop a web-based diagnostic key for the identification of nutrient disorders of tobacco.

While deficiencies of the primary macronutrients lead to stunted and symptomatic tobacco quite quickly, plants that are magnesium (Mg) deficient typically grow to be large and healthy. In fact, Mg deficiency symptoms did not begin to appear in the nutrient disorder irrigation system until after several weeks. [In contrast, potassium (K) deficiency developed very quickly on tobacco.]

Tobacco that is deficient in Mg will initially develop symptoms on the lower or older foliage (Fig. 1). These symptoms occur as an interveinal chlorosis that begins on the leaf margin, typically toward the leaf tip (Fig. 2). Symptoms begin on the lower foliage due to the fact that Mg is mobile within plant tissues and is translocated from these older leaves to the young developing tissues during limited Mg conditions. 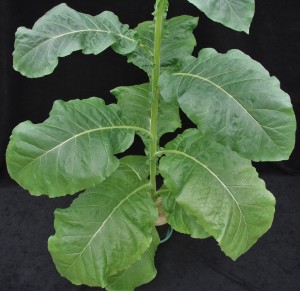 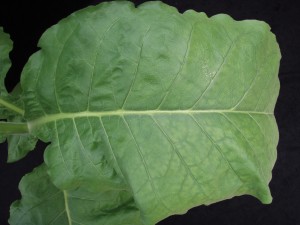 Figure 2. A closer view of a symptomatic leaf shows the pattern of chlorosis that begins on the margins, closer to the leaf tip.
©2016 Forensic Floriculture 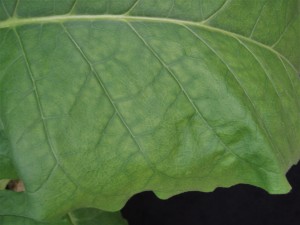 Figure 3. The pattern of interveinal chlorosis will eventually spread to the center of the leaf, as may be seen here.
©2016 Forensic Floriculture

It is important to note upon observing interveinal chlorosis, that similar symptoms may also be caused by an iron (Fe) deficiency. A pattern of interveinal chlorosis often develops under Fe deficient conditions, but these symptoms first occur on the youngest or upper leaves. The location of the symptoms on the plant can be used to determine whether the plant is deficient in Mg or Fe.

The 360-degree image below shows the symptoms of interveinal chlorosis occurring primarily on the lower and central foliage (Fig. 4).

Figure 4. The 360-degree view of this symptomatic Mg deficient tobacco may be viewed by clicking on the above picture.
©2016 Forensic Floriculture