Find this article at:
go.ncsu.edu/readext?419909
— Written By jbhenry2

In this tobacco research update, we highlight the symptoms of phosphorus deficiency. These images are part of a project supported by the North Carolina Tobacco Foundation to develop a web-based diagnostic key for the identification of nutrient disorders of tobacco.

Being one of the three primary macroelements required for plant growth, phosphorus (P) deficiency symptoms develop quickly when P is in short supply.

Phosphorus deficiency in tobacco begins as a noticeable stunting when compared to a plant with a sufficient supply of P (Fig. 1). Additionally, a P deficient tobacco plant may be more likely to develop a darker green coloration of the upper foliage. Lower leaves will become chlorotic with a mottling of olive green leaf spots (Fig. 2). The initial symptoms appearing on the lower foliage may be attributed to the fact that P is mobile within plant tissues and is translocated from these older leaves to the young developing tissues under periods of low P. 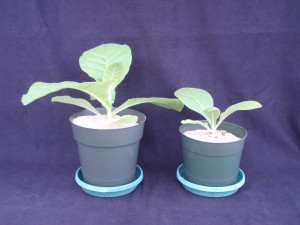 Figure 1. The initial symptoms of P deficiency include the general stunting of the plant.
©2016 Forensic Floriculture 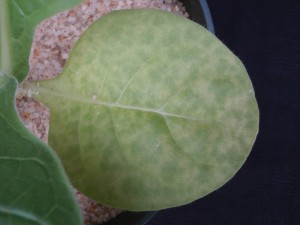 In advanced cases, the plant remains severely stunted, with the oldest leaves becoming entirely necrotic. The chlorosis and necrotic spotting works its way up the foliage with only the youngest leaves remaining green. This wide range of symptoms may be observed in the 360-degree image below (Fig. 4, click image to play video). 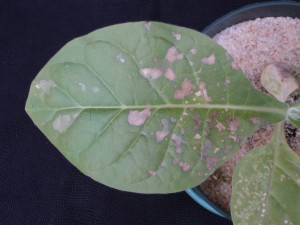 Figure 3. Necrotic spotting that occurs on the foliage of tobacco is a more intermediate to severe symptom of P deficiency.
©2016 Forensic Floriculture

Figure 4. The 360-degree view of this symptomatic plant with a severe phosphorus deficiency may be viewed by clicking on the above picture.
©2016 Forensic Floriculture