— Written By Jeremy Slone and last updated by Carol Hicks 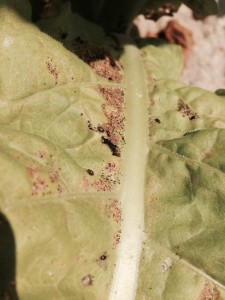 We are seeing more flea beetle feeding at sites with the lowest leaves still present on plants and consistently seeing beetles at all sites. The image above shows one example of how flea beetle damage over time can result in lacing and holes. It is important to note that we are seeing beetles on all parts of the plant, but the heaviest damage is on the bottom most leaves. Most of the upper foliar damage we are seeing is actually old feeding damage from either hornworms or budworms. The one site that was over threshold this week for hornworms was isolated at a single stop with all of the hornworms during that scouting visit being at one stop of five plants.

At this point we have also harvested at all sites, with some already past their second priming. Depending on the region, we expect most fields to harvest about 3-4 primings. As we approach the later primings, the pre-harvest interval of any chemical spray is an important conideration for insect management. Some of our sites are rapidly approaching the end of the season and it may not be economically justified to make late season chemical sprays in some situations.