Find this article at:
go.ncsu.edu/readext?304053
— Written By tcmclamb and last updated by Hannah Burrack 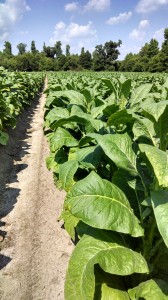 In our eight week of scouting, we exceeded threshold for one of the key tobacco pests for the first time! Our Eastern 1 (Grower Standard) and Eastern 2 (IPM) fields were both over threshold for tobacco budworms. The grower standard field (Eastern 1) was treated with an application of Besiege (containing chlorantraniliprole and lambda-cyhalothrin) about a month ago when no budworm larvae were present. Budworm counts in both fields were exactly the same, suggesting that this preventative treatment had no measurable effect on tobacco budworm infestation, which we would expect since the plants have grown considerably in one month.

Tobacco budworm pressure was also high at our research station locations, and several of our plots were treated either for threshold comparison or to assess the efficacy of registered and unregistered insecticides.

While we only saw one stink bug in our scouting locations this week, we observed several brown stink bugs on tobacco in a field in Greene County. Stink bugs cause characteristic leaf wilting when they feed on the mid rib of tobacco leaves. Normally leaves can bounce back from this injury unless the weather is hot and dry (sound familiar?). In the case of hot dry weather, leaves may experience some sun scald, but the damage is generally not significant enough to justify treatment. We do not have thresholds for stink bug treatment in tobacco for this reason.

Interestingly, no tomato spotted wilt virus was observed in any of the grower fields this week despite the high numbers of thrips that we observed this early summer. This supports our assumption that while thrips numbers may have been high this year, they may have been uninfected and not transmitting large amounts of virus or the plants may have been large enough to withstand a systemic infection.

On Station, Kinston – Control plants with no insecticide treatment

On Station, Rocky Mount – Control plants with no insecticide treatment

** Plots were not treated due to the experiment, but some plots with similar amounts of budworm infestation, were treated.